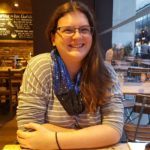 Oh, getting ready to take part in some chats. It's been a little while, hope my typing skills are fast enough.